My favorite Kansas City architectural site was a shopping mall. Not just any mall, but the first shopping mall built for automobiles in the country--Country Club Plaza. "The Kansas City plaza (Country Club Plaza) is a unique and splendid shopping district built by the J. C. Nichols Co. in the 1920s. It is claimed to be the first suburban shopping district in the United States located in the blocks around 48th Street and Nichols Road in Kansas City, Missouri. It was the first shopping center in the world structured to cater the automobile. The Plaza opened in 1922 to instant success. ...The architecture of the Plaza mirrors influences of Seville, Spain. There are more than thirty statues, murals, and tile mosaics  exhibited in the area, a few important architectural reproductions, such as a half-sized Giralda Tower, precise light fixture reproductions of [the] San Francisco Path of golden lights. The area features magnificent Spanish tile, piazzas, and terra cotta rooftops. Kansas City is rightly titled the 'city of Fountains' and the feel is reflected by distinct fountains placed in the plaza... ." (http://www.kansascityplaza.us/) 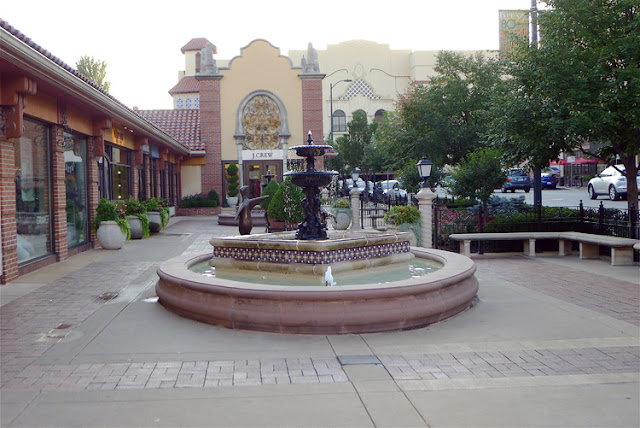 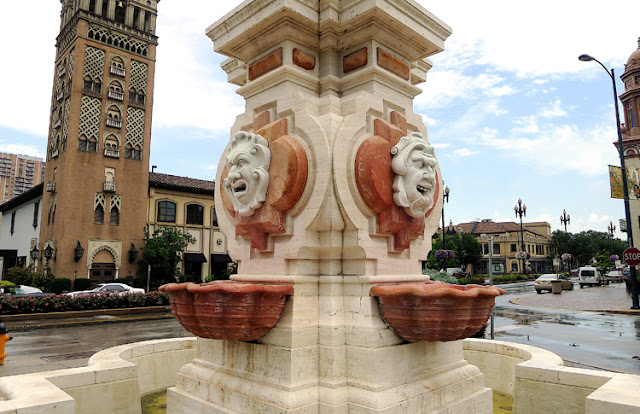 "All the buildings are of Spanish architecture, many of them with tall handsome towers, beautiful rounded domes, and attractive cupolas, all with lights inside and floodlights at night. All the buildings are decorated with imported Mexican tile or lace-like terracotta. Many are adorned with graceful wrought iron balconies, etc. On the exterior walls are colorful Mexican tile plaques, and in some instances niches have been provided and lovely objects of art placed therein. Free parking stations...some of them surrounded with low stucco walls topped with dull red tile...have been provided, with their corners inset to form tiny parks in which have been placed beautiful old fountains, and other objects of art, along with marble benches inviting the shopper to rest in the shade of the trees and enjoy the splashing of the sparkling water." (From Ethel V. Treshadding's "Epilogue" to Jesse Clyde Nichols (1880-1950) Memoir, p. 31,  http://www.umkc.edu/whmckc/PUBLICATIONS/JCN/JCNPDF/JCN087.pdf)

Many of the imported art tile panels are marked with the company names. 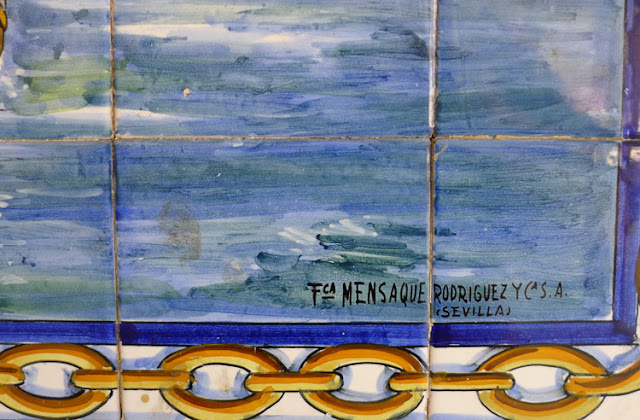 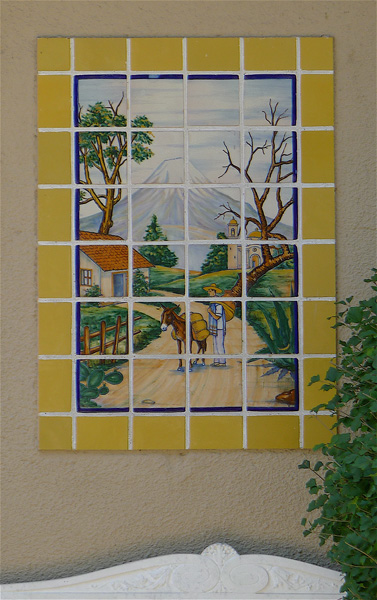 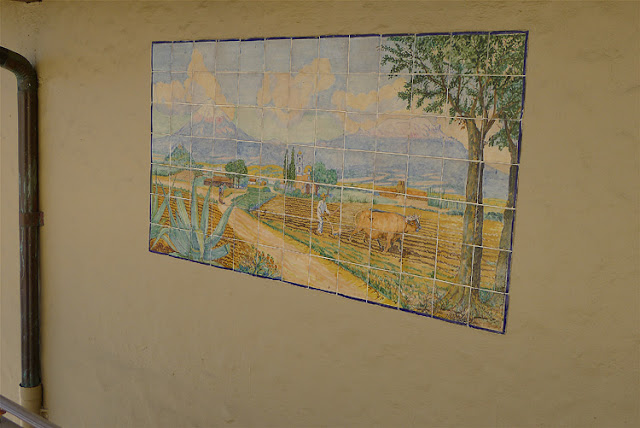  "The gay colored tile above the doorways were made in Seville, illustrating the gaycolors of Spanish structures. The soft tone tiles of weathered appearance in the roofs recall an old Spanish market place." (J.C. Nichols in p. 2 of "Country Club Plaza", Planning for Permanence: the Speeches of J.C. Nichols, http://www.umkc.edu/whmckc/publications/JCN/JCNPDF/JCN081.pdf) 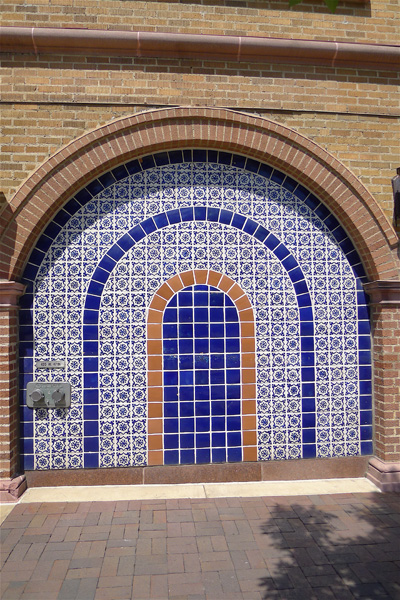 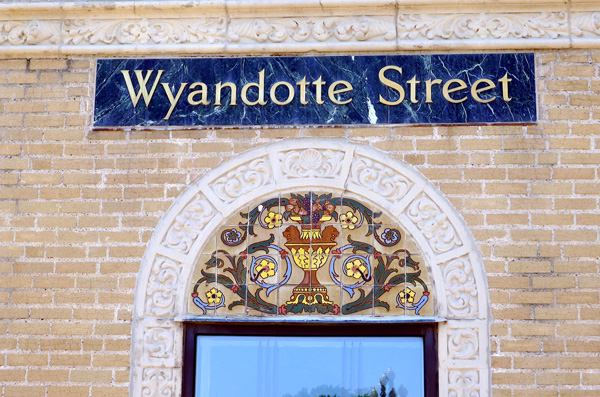 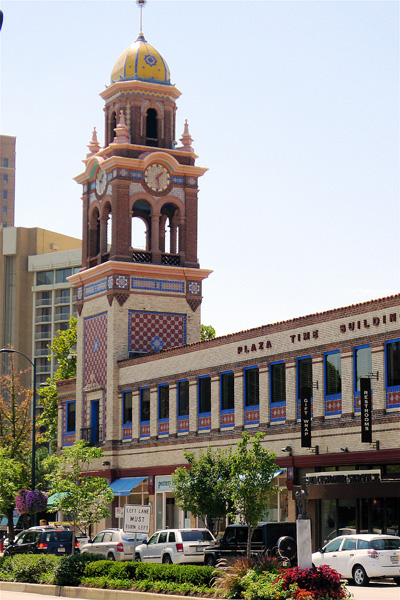 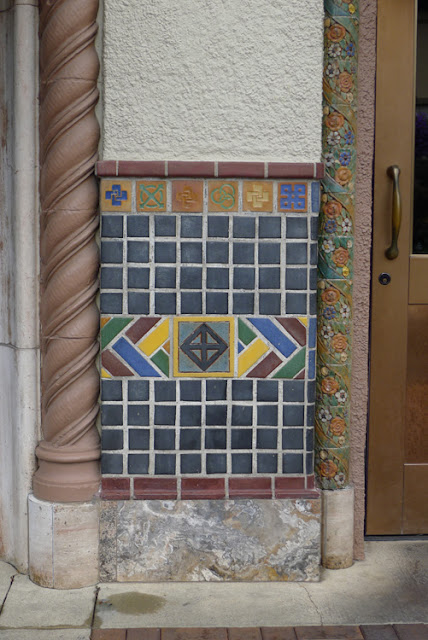 When I was in Kansas City, similar blocks were being sold by A&O Architectural Salvage.

 Although Country Club Plaza was built in 1922, there have been renovations since then. For instance, "On September 12, 1977, a major flood of Brush Creek caused severe damage to the Plaza and resulted in a number of deaths. The flood prompted a vast renovation and revitalization of the area that has allowed it not only to survive but to thrive." (http://en.wikipedia.org/wiki/Country_Club_Plaza,_Kansas_City) Also, according to Joe Taylor, the founder of the Tile Heritage Foundation, many "...of the contemporary tiles at the Plaza in KC are by our friend Carolyn Payne, [Carolyn Payne Murals in KC]. She did the clock on the tower, for instance." In an email from Carolyn Payne to Michael Padwee (9 Nov 2011), Ms. Payne explains: "I started my Payne Creations Tile in 1984 and replaced some of the pattern tiles and duplicated the look of some over the years while JC Nichols Co. managed the Plaza. The last project I did for Miller Nichols (JC’s son) was the clock tower you have pictured...(the 3-5’ clocks, and I later did some of the pattern tile on the building). Annette Bloch also had me do some pattern tile for the cancer park at the west end of the Plaza you don’t see unless you go down into the garden."

"To create the tile mural, Carolyn first draws on tracing paper and then transfers the drawing to the tiles. The wax line work is applied either by hand or by silk screening. Carolyn often fires the tiles several times, and the glazes she employs cause the colors to change to a brilliant richness after the first firing. Carolyn likes to work in the cuerda seca method of a wax/oil line and raised glazes."(http://www.paynecreations.com/) 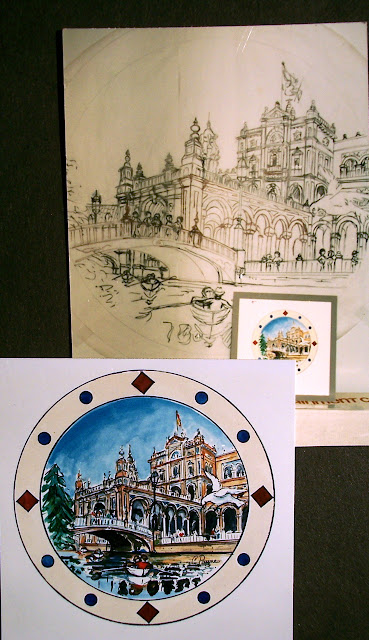 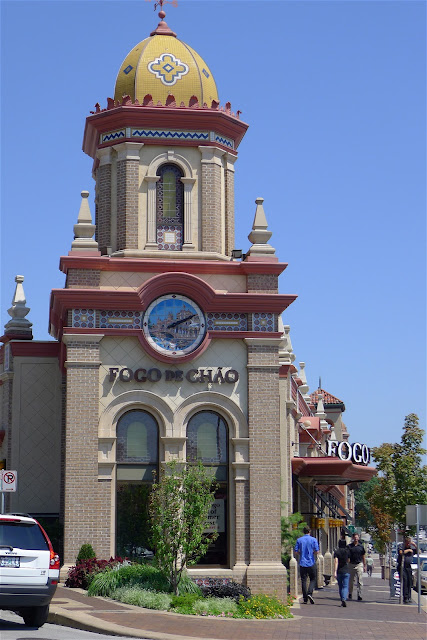 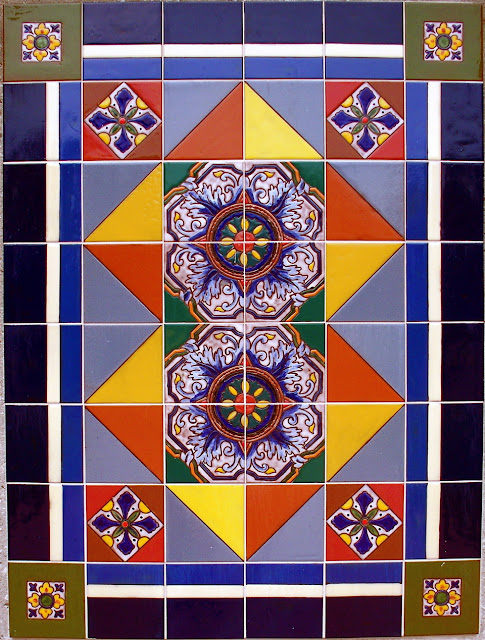 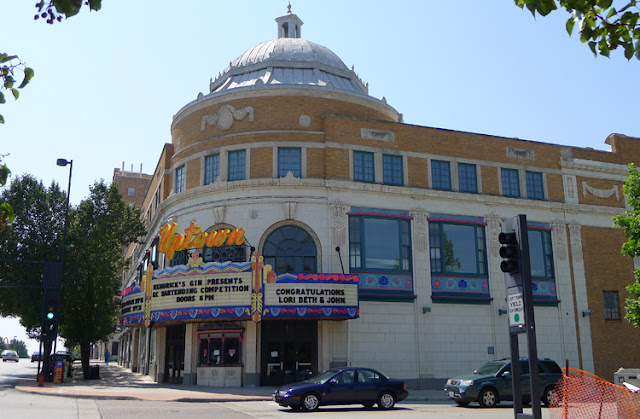 “The original design for the Uptown was carried out by Kansas City architect Robert Gornall. Construction first began on the portion of the Uptown that would house offices and shops along Broadway [on the left]. This office and retail portion of the Uptown was completed in November 1926. Gornall's plans also called for a theater to extend along the rear portion of the building, with a tower at the north end to serve as an entrance and foyer. ...Austrian-born designer John Eberson was hired to complete the construction of the Uptown and oversee the decoration of the interior… . Eberson completed the design of the Uptown in Italian Renaissance style as an atmospheric theatre. It was the only one of its kind in Kansas City as well as the State of Missouri. The inside of the theater replicated an outdoor Mediterranean courtyard, complete with a nighttime sky ceiling with twinkling stars, clouds, and mechanical flying birds. The Uptown opened on January 6, 1928… .” (http://en.wikipedia.org/wiki/Uptown_Theater_(Kansas_City,_Missouri))

"John Eberson (1875-1954) was born in Cernauti, Bukovina, part of Romania in 1875 and immigrated to the United States in 1901. He studied electrical engineering at the University of Vienna. He settled in St. Louis, MO. and began working for Johnston Realty and Construction Company and in 1904 set up his own practice which he moved to Chicago in 1910. ...John Eberson brought his son Drew (1904-1989) into the business in 1926 and the practice was moved to New York in 1930. Over the decades they designed over 1200 theatres." (http://satheatres.com/John_Eberson.php) "Eberson attained national, and even international acclaim for his atmospheric theatres, many of them executed in exotic revival styles, including Italian Renaissance, Moorish Revival and others. The first of these such theatres is considered to be the Orpheum in Wichita[, Kansas]. ...He specialized in depicting outdoor settings with no formal walls and made the whole auditorium a gigantic stage set that enveloped the whole audience. Eberson designed close to 100 movie palaces... ." (http://en.wikipedia.org/wiki/John_Eberson#Gallery) 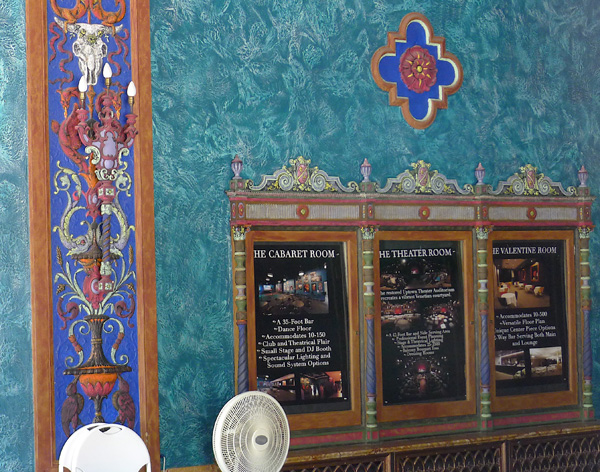 “In the forties, the Uptown rode the World War II movie business boom to unrestrained heights of box office success with well-known movies of the time, and in the fifties and sixties showed first-run movies along with live vaudville and stage productions. In the early seventies, the Uptown Theater housed the Lyric Opera Company for two years. Beginning in 1973, the theater was home to the Palace Dinner Playhouse. The Uptown Theater was listed on the National Register of Historic Places on June 27, 1979. In the late 70's and through to the mid-80's the Uptown operated mainly as a concert venue. During that time the original [tile] interior was white-washed. Eventually the Uptown fell into disrepair and the marquee went dark in 1989. ...Since its purchase in 1994 by UGA LLC, a 15 million dollar building, restoration, and renovation project has recreated the vibrant colors of John Eberson… .” (http://www.uptowntheater.com/history.html)

Kansas City has many vernacular stone houses within its borders, many of which are contained within its historic districts. One such area that I visited was the Hyde Park Historic District, more specifically the area around East Armour Boulevard, Main Street and Paseo Boulevard. The stone houses have been described as “big, gutsy houses…[that] typify turn-of-the-century architecture in K.C. ...stylistically, they run the gamut from Art Nouveau to Craftsman to Colonial Revival to Prairie-influenced. What ties them together is their air of undaunted confidence. The rough-cut stone treatment is not just unapologetic, it’s downright confrontational!” (James C. Massey and Shirley Maxwell, “Stone Houses that say ‘Kansas City’”, Old House Journal, Vol. XXI, No. 5, Sept.-Oct. 1993, p. 20)

“The Kansas City Art Institute (KCAI) is a private, independent, four-year college of fine arts and design founded in 1885… . In 1927 Howard Vanderslice purchased the August R. Meyer residence, a Germanic castle entitled Marburg and its 8-acre...estate at 44th and Warwick Boulevard adjacent to the planned Nelson-Atkins Museum of Art. A Wight and Wight addition was added to the building. The residence was later renamed "Vanderslice Hall" and is listed on the National Register of Historic Places along with another building on the campus—Mineral Hall.” (http://en.wikipedia.org/wiki/Kansas_City_Art_Institute)

Mineral Hall, 4340 Oak Street, “was the home of mining magnate R. E. Bruner, who embedded mineral samples in the interior stone walls of his first-floor library, inspiring the name Mineral Hall. Dating to 1903-04, the structure is an amalgam of Art Nouveau, Prairie Style, Second Empire and Neoclassic architectural elements.” (http://www.kcai.edu/about-kcai/campus/mineral-hall)

There are a number of buildings in Kansas City that enjoy only a marginal existence, yet may deserve to be protected. Below are a few of them. 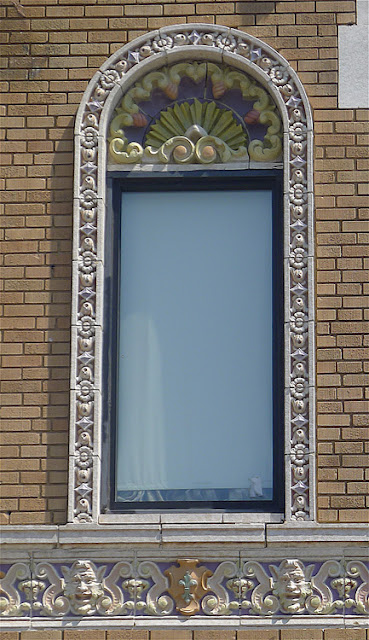 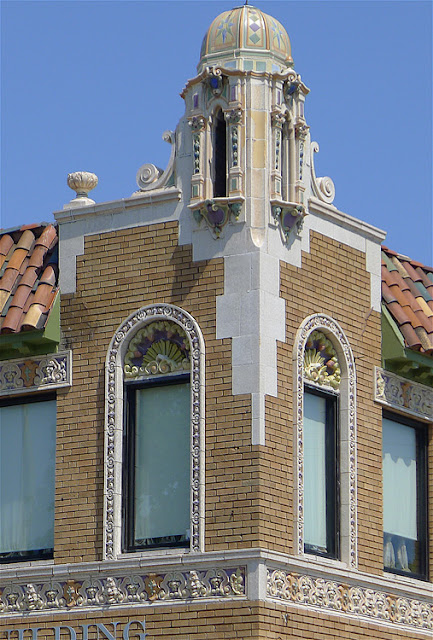 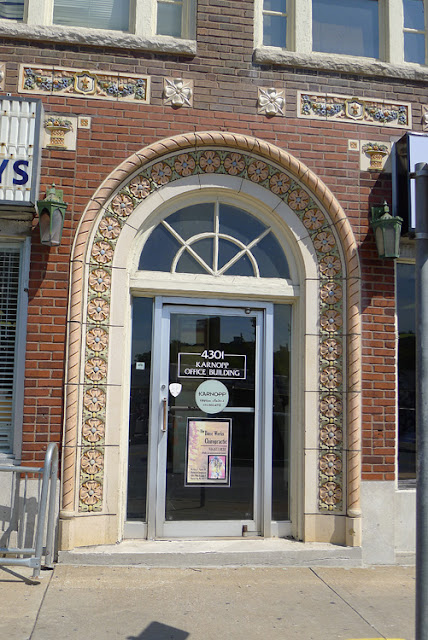 This building has a polychromed, Art Deco, terra cotta tile facade. The buildings on Main Street in this area were excluded from the Hyde Park Historic District, and are thus unprotected. Some buildings have been razed, and their polychromed terra cotta is, currently, or has been, sold.  "After Main Street...was completed in 1926, these commercial buildings were built to serve the [Midtown] district's growing southern suburban residential population. Designed by prestigious architects, including Thomas Wight, John McKecknie, Clarence Kivett, and Shepard, Farrar and Wiser, the structures housed shops, offices, entertainment establishments and movie palaces. They include the best examples of polychrome Art Deco terra cotta in the city." (American Institute of Architects Guide to Kansas City Architecture and Public Art, American Institute of Architects, Kansas City, 2000, p. 110) 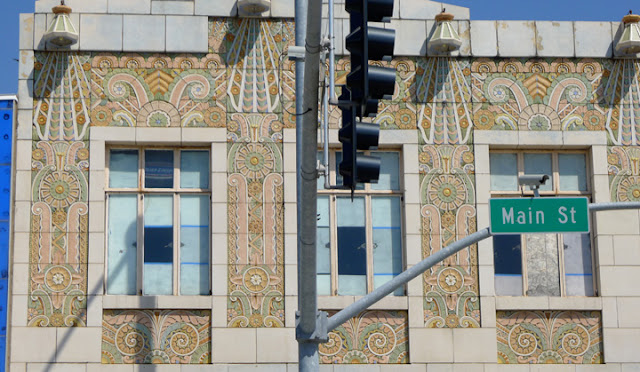 3935-41 Main Street was built in 1929, and the architects were McKecknie & Trask. "John McKecknie was born in 1862 in Clarksville, Ohio. [He]...enjoyed great success in Kansas City. He is credited with designing over 120 buildings in the Kansas City area before his death in 1934. His works included office buildings, industrial complexes, apartment buildings, and high-end residences in every area of Kansas City. ...In 1914, McKecknie formed a partnership with one of his long-time employees, Frank Trask. Trask began drafting in McKecknie’s office in 1903, after graduating from the Columbia School of Architecture. Trask continued his practice after McKecknie died in 1934... " (http://www.dnr.mo.gov/shpo/nps-nr/10000461.pdf, Section 8, pp. 14-15) 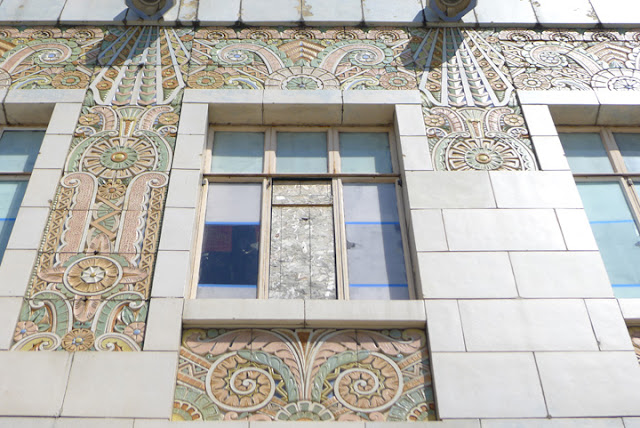 60 S. James Street was an abandoned building when I spotted it. Although the building, and its terra cotta plaques, seemed in fairly good condition, I fear it won’t survive too much longer. 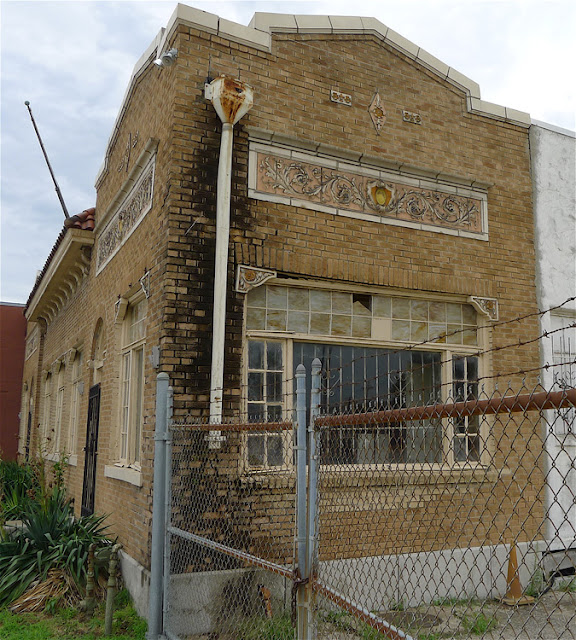 The terra cotta on this and the other buildings may end up in an architectural salvage store (which is better than the City dump!). 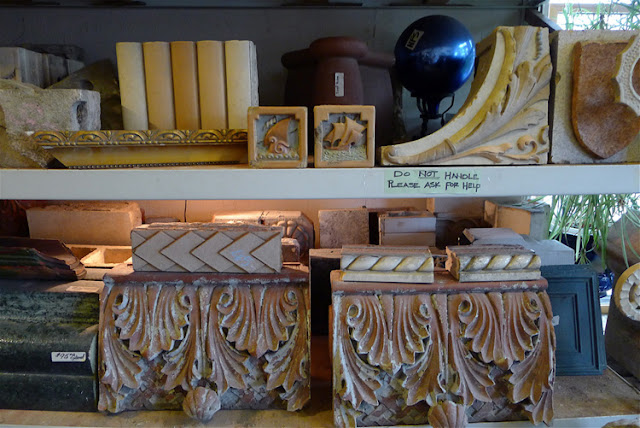 I would like to thank Joe Taylor of the Tile Heritage Foundation and, especially, Carolyn Payne (Carolyn Payne Murals) for their help with this post.