During World War II two famous modernist architects--Marcel Breuer and Walter Gropius--collaborated on a residential community for workers, Aluminum City Terrace. "Aluminum City Terrace, the only housing project in America designed by...Gropius and...Breuer, was built by the federal government to house defense workers during World War II. The Terrace was the first defense housing development sold under the federal government's Mutual Home Ownership Plan and continues to operate as a successful cooperative." (https://commons.wikimedia.org/wiki/File:Aluminum_City_Terrace,_Gropius,_HAER_PA,65-NEKEN,3-2.jpg) Marcel Breuer (b. 1902, Pecs, Hungary-d. 1981, New York City) "...studied and taught at the Bauhaus in the 1920s. The Bauhaus curriculum stressed the simultaneous education of its students in elements of visual art, craft and the technology of industrial production. Breuer was eventually appointed to a teaching position as head of the school's carpentry workshop. He later practiced in Berlin, designing houses and commercial spaces. ...In the 1930s, due to the rise of the Nazi party in Germany, Breuer relocated to London. While in London, Breuer was employed by Jack Pritchard at the Isokon company; one of the earliest introducers of modern design to the United Kingdom. Breuer designed his Long Chair as well as experimenting with bent and formed plywood. Between 1935 and 1937 he worked in practice with the English Modernist F. R. S. Yorke with whom he designed a number of houses." (http://en.wikipedia.org/wiki/Marcel_Breuer)

"By the time he left Germany in 1935 to join Gropius in London, Breuer was one of the best-known designers in Europe. His reputation was based upon his invention of tubular steel furniture, one big residence, two apartment houses, some shop interiors and several competition entries. Two years later, Gropius asked him to join Harvard’s architecture faculty and, during WWII their partnership revolutionized American house design while teaching a whole generation of soon-to-be famous architects." (http://www.marcelbreuer.org/Biography.html) 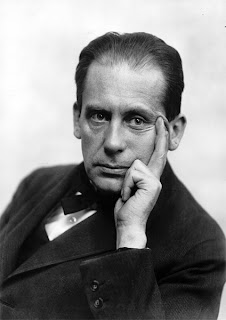 Walter Gropius (1883-1969) "... studied architecture in Munich and worked in the office of Peter Behrens in Berlin. In 1910 he formed a partnership with Adolf Meyer. The following year he designed the spectacular Fagus factory in Alfeld-an-der-Leine.


Gropius followed this with the Werkbund Exhibition Building in Cologne (1914).

"Influenced by the ideas of William Morris, Gropius established the Arts and Crafts School in Weimar, which became the world-famous Bauhaus. His revolutionary methods and bold use of unusual building materials was condemned as "architectural socialism". The Bauhaus was forced to move to Dessau where it was housed in a building designed by Gropius. When the Nazis came to power in 1933 Gropius moved to England before emigrating to the United States in 1937. He was professor of architecture at Harvard University (1938-52) and designed the Harvard Graduate Center (1949), the American Embassy in Athens (1960), the University of Baghdad (1961) and the Pan Am Building (1963). Walter Adolph Gropius died in 1969." (http://www.spartacus.schoolnet.co.uk/USAgropius.htm)

New Kensington, PA is a few miles outside of Pittsburgh. It was once the home of a major Alcoa Aluminum defense plant during World War II, and Aluminum City Terrace was going to be built on a series of hills overlooking the town for the Alcoa workers. The Alcoa plant moved just before the development was built, but Gropius and Breuer still produced plans that were accepted by the government to house defense workers. To get to Aluminum City Terrace you have to drive up a steep hill--it seemed like a 60º slope to me. The houses remain, and some have been modified.

"[They] designed long blocks of one- and two-story units arranged in response to the hilly contours of the site. Units on steeply sloping sites were supported by lally columns so as to avoid the need for expensive grading of the site and foundations. The north facades were clad in brick veneer. The south elevations, which provided access to the gardens and faced the road, were faced with cedar siding laid horizontally on the ground floor and vertically on the upper story. A louvered sunshade protected the large windows on this façade, which was constructed using the truss system developed for Hans Falkner's ski lodge. The limited budget of $3,500 per house led Gropius and Breuer to use a partially prefabricated standardized wood-frame construction." (http://breuer.syr.edu/project.php?id=231)

A draft statement about this project, written on July 2, 1941 by the architects, illustrates the architects' concerns for the overall health and well-being of the defense workers who would live there.

"The peculiarities of the site allowed a plan in which almost all the main windows have an uninterrupted view toward the south. By a careful location of the buildings..., the units themselves have a loose, informal relationship to each other, each location combining the most favorable orientation [...and] view... . ...The form of the dwelling units resulted from a careful study of living requirements and structural limitations. All the units have through ventilation. The main, southern face has a continuous horizontal band of windows for maximum sun, light and view. The north wall has only small vents where necessary. The general orientation of the living areas to the south allows a complete control of the sun's rays. In this latitude the summer sun has a very steep angle while the winter rays are much lower. With the horizontal louvered frame over the windows, the hot summer sun can be completely eliminated [...from the interior] of the building, without sacrificing light and view, while in the winter, the rays of the sun pass under the frame and penetrate deep into the room...[for] desirable year round sun-control. ...In addition to the general green areas throughout the project, each tenant will have his own terrace opening from the living area and a garden approximately 20'-0" x 50'-0"." (http://breuer.syr.edu/xtf/view?docId=mets/19441.mets.xml;query=;brand=breuer) 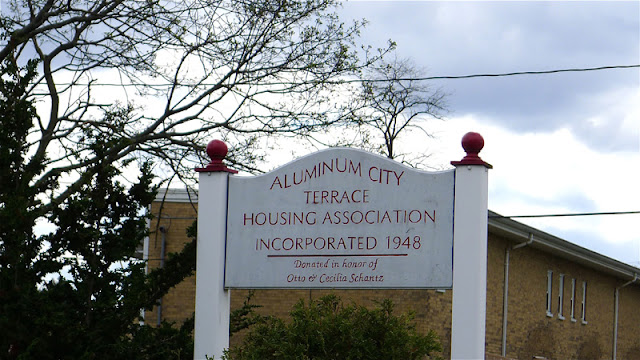 "After the war, a group of satisfied tenants got together and formed a cooperative in order to purchase the 'Terrace' from the government, and in 1948, the experiment in wartime housing became a co-op. Since then, the management of the neighborhood has been overseen by a board of directors, all residents, who meet monthly to take care of all necessary business and upkeep of the buildings. Amazingly low monthly co-op fees now cover the costs of gas, water, sewer, garbage collection, cable TV and basic maintenance... ." (http://www.wqed.org/tv/pghist/neighborhoods/a_city.shtml)

We met one of the residents near the former school building. She was very enthusiastic about living in Aluminum City Terrace. For her very low monthly rent--there were a few renters--she said she received the same amenities as the co-op owners.